About School Bus Safety in 2022

About School Bus Safety in 2022

Some children are lucky enough to be able to walk to school, some parents have the time to drive their kids to school, and many children ride the bus. In fact, in 2022, there are almost 500,000 United States school buses driving to and from school daily, and today’s parents of school-bus riding children have concerns about the ability of buses to get their children to school safely. 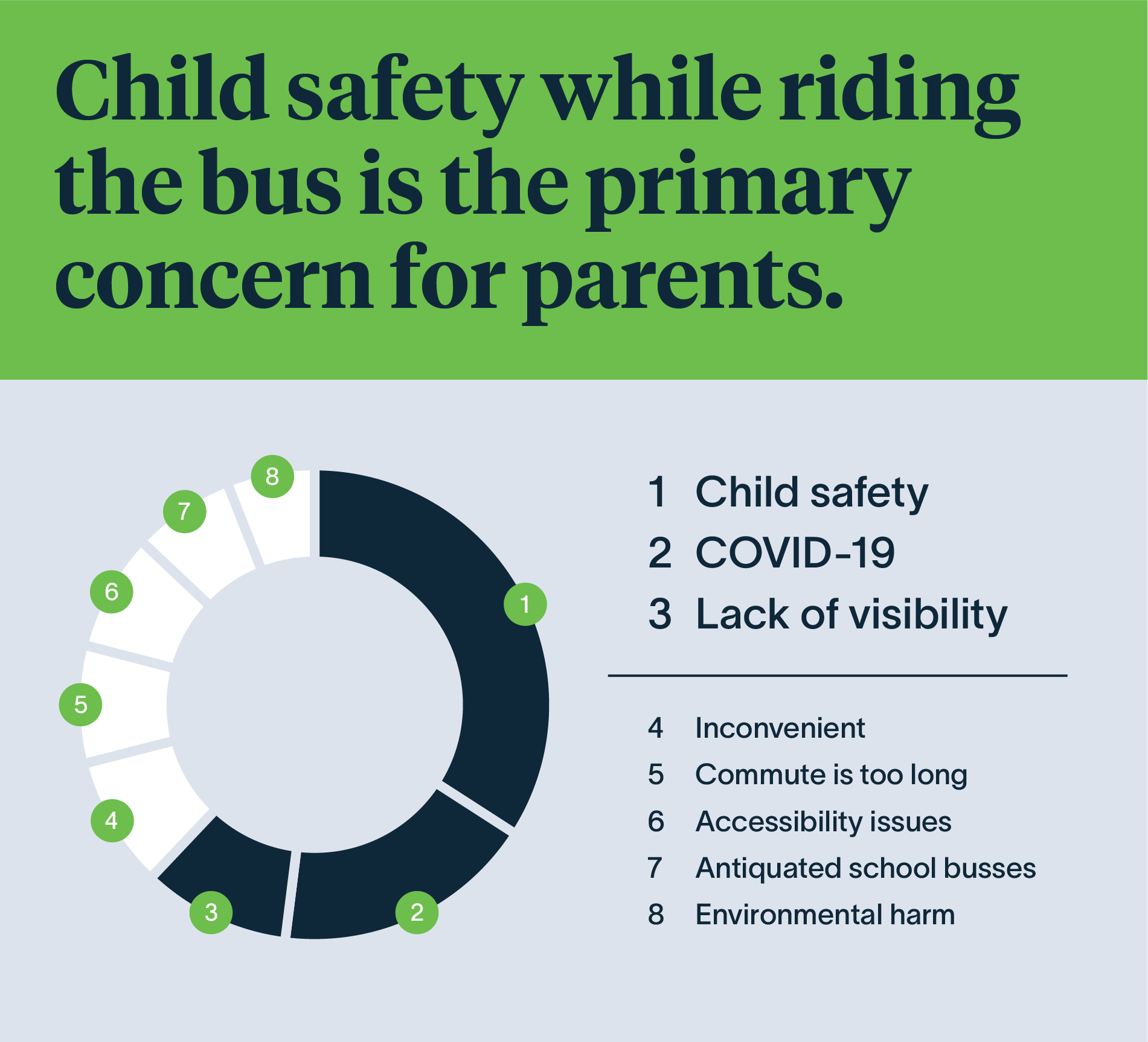 To find out exactly how parents of school-aged children felt about the current state of student transportation safety, we commissioned a survey of 3,500 parents and the results were eye-opening.

Here’s a brief summary of what we learned:
⦁ 52% of parents believe that safety on the school bus is far and away the biggest concern — five times more important than any other issue.
⦁ Less than half of our respondents believed their school bus system was safe, efficient, and good for the environment.
⦁ 64% believed bus systems needed technical advancements.
⦁ 41% said bullying and/or fighting was an overwhelming concern.
⦁ 55% had questions about driver trustworthiness and competence.
⦁ 67% of parents believe they should be able to track the school bus just like a package being delivered to their home.

Child safety before, during, and after the bus ride was by far the biggest concern as 34% of respondents expressed safety as their main concern. A full 18% mentioned that the possibility of COVID-19 transmission on the bus was a serious safety issue. 8% felt that long commutes could be harmful to their children.

9% construed unreliable, ever-changing, or inconvenient pick-up and drop-off points as safety issues and 7% worried that antiquated school buses were not safe. 10% stated that the lack of modern tracking and visibility was a definite safety concern.

Parents Very Worried About The Environment

Electric cars, trucks, and buses used to be a novelty, but electric vehicles have recently made serious progress in replacing traditional gas- or diesel-powered vehicles.

That said, most school buses on the road today are fossil-fuel powered and here we learned that less than half of our respondents believed the school bus system was safe, efficient, and good for the environment, while 56% were either unsure or believed buses were not safe, not efficient and were harmful to the environment.

Technological school bus improvements have been slow to advance for many years; it seemed like the stop sign that manually appeared when a child was let off the bus on a country road was the only technological innovation seen for decades.

We wanted to further investigate the tracking aspect of school bus safety. Before cell phones, the only method to find out where a school bus was currently located was to institute reverse forensic tracking by using a landline phone. Parents strongly felt, however, that knowing if and when their child got on or off their school bus should be as easy as knowing if and when a package was delivered. A significant 67% of parents believed that they should be able to track the school bus just like a package. Another 15% were on the fence, meaning just 18% were against more visibility and tracking.

Having a driver trained in de-escalation techniques is especially important in these modern uncertain times, and 16% of respondents noted that the school bus drivers’ background checks and general training were a critical concern.

Getting to School Safely

On average, according to the National Highway Traffic Safety Administration, 121 school bus riders are killed in accidents every year. While this is a small percentage of all school bus riders, the thought of one’s child killed or even just injured in a school bus accident is chilling.

Therefore, parents are concerned, and just 16% were extremely confident about their kids getting to and from school safely on the bus. 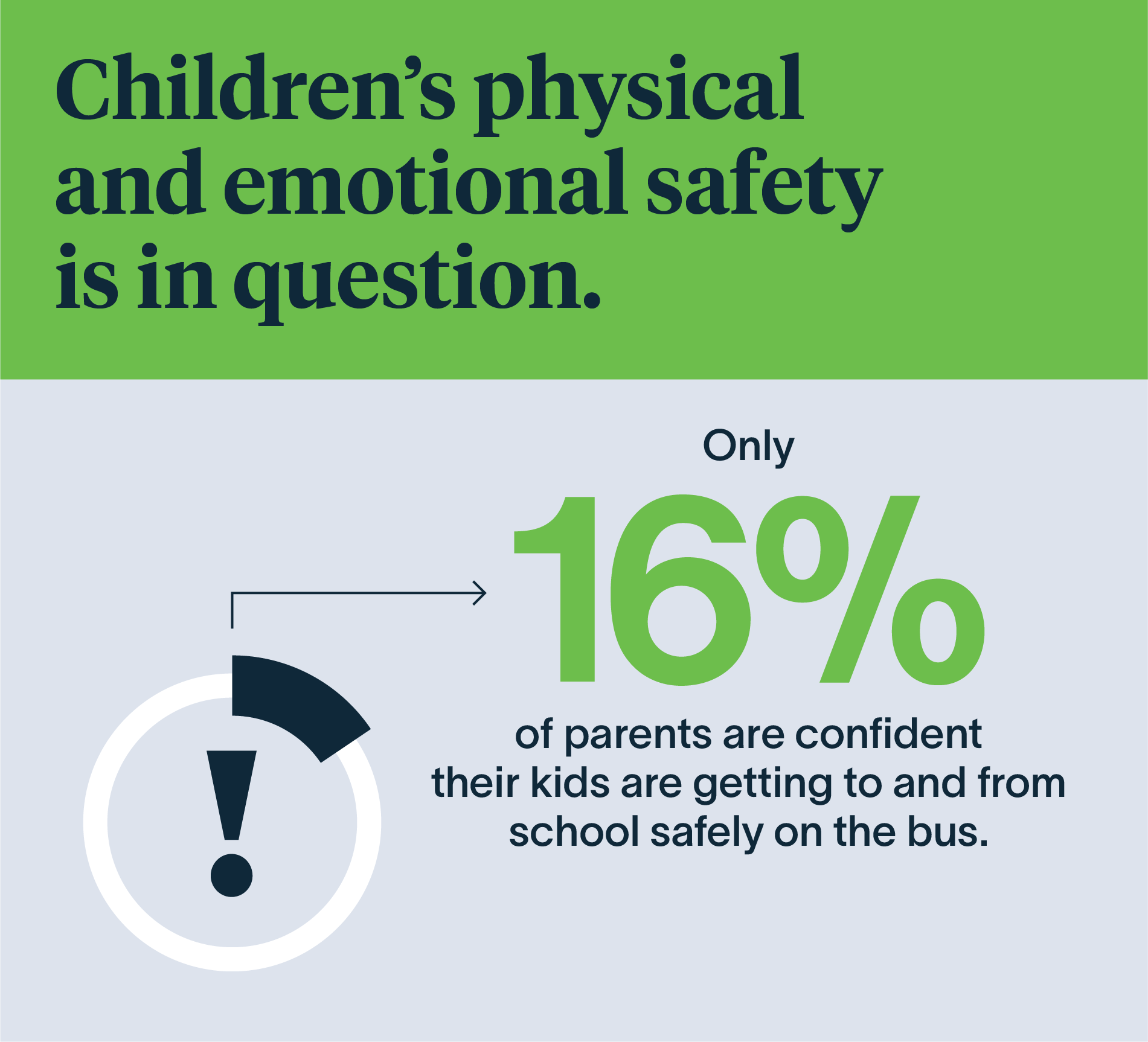 In total, only 42% were fully confident, and 58% had serious doubts about their children getting to and from school safely on the bus.

What Changes are Needed?

Parents are not merely idle complainers regarding school bus safety, and they have definite suggestions about what they would most like to see changed to increase child safety within the school bus system. 24% wanted more visibility through secure onboard cameras and 13% desired more training for school bus drivers.
11% would like to see better air quality to prevent kids from breathing in toxic diesel fumes, and 18% were for better digital communication including real-time schedule and routing updates.

15% wanted mandatory seat belts for all students on-board buses, and 10% looked for better sanitation and air circulation.
And almost 10 percent thought that more efficient school bus routes to shorten time on the bus would be a vast improvement.

Were background checks completed, and more important, was attention paid to the results? Did school bus driver trainees receive enough on-the-route experience before they were pronounced a competent and good driver? It is concerning to learn that only 17% of our survey-takers were extremely confident in the bus driver’s abilities, and a full 55% had questions about driver trustworthiness and competence.

Even with a waning pandemic, COVID-19 concerns were paramount. Vaccines, anti-virals, masks and social distancing have helped the situation, but parents were still very worried. COVID-19 was still a fear for many, as 72% had concerns about the risks associated with COVID-19 on school buses.

Placing a child on the school bus for the first time can be extremely stressful. With technological advancements in tracking and visibility, web-based location sharing and higher quality driver training, the fears of parents regarding that twice-a-day trip could be alleviated.

Parents have clearly spoken and want the changes now, and the sooner advancements can be implemented, the sooner parents and children will sleep better at night knowing that the next day’s bus trip has a great chance of being safe and efficient.