School bus exhaust is dangerous: parents are worried, but what are schools doing about it?

School bus exhaust emissions are a growing problem in America and across the Globe. Diesel-run vehicles produce toxic fumes and school bus exhaust is among the biggest contributors. Despite advances in electric technology, about 95% of America’s school buses still run on diesel. And they’re carrying some of the country’s most vulnerable passengers: our children.

More than 50% of Parents are worried. Communities are being affected by harmful pollutants. So what, then, are schools doing about this problem? Until now, districts had few alternative options and were presented with little opportunity for change. With so much growing evidence showing the dangers of school bus exhaust and new electric fleets readily available to replace them, schools are now uniquely positioned to lead the EV revolution. 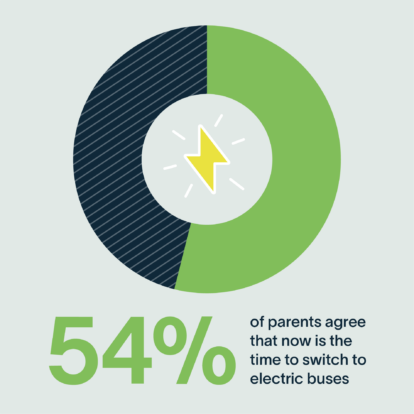 School bus diesel exhaust is dangerous, no question. And kids are even more vulnerable to the effects of pollution than adults. When children are exposed to pollutants during those crucial stages of mental and physical development (their lungs in particular are still not fully developed), there are big consequences that can lead to long-lasting health issues like asthma or disease. In fact, the diesel exhaust is internationally recognized as a cancer-causing agent and the EPA classifies it as a likely carcinogen.

Studies show that air pollution specifically around schools is connected to poor academic performance and lower student health. This equates to low attendance rates and high proportions of students who are unable to meet educational testing standards. One study in California, for example, found that students who were exposed to outdoor pollution were disproportionately exposed to high respiratory risks and also showed lower performance in standardized tests.

Obviously, parents are worried. A large majority (72%) of parents have serious concerns about diesel school bus fumes creating harmful air quality. Over half of parents (51%) think children are at risk because of exposure to diesel exhaust. They’re right! In fact, parents are at risk too. Air pollution from diesel exhaust can even be harmful to developing pregnancies. Researchers found relationships between a pregnant mother’s exposure to diesel and the chances of the child developing autism. Air pollution, even as early as in utero, can be harmful for proper cognitive development.

School bus exhaust fumes affect more than just kids and their families. Harmful pollution affects the communities around them. They affect the skilled bus drivers, the neighborhoods, the innocent bystanders, and the environment, which in turn impacts every single one of our lives.

In California, for example, transportation contributes to almost 40% of the greenhouse gas, and heavy-duty vehicles (like buses) are responsible for a 5th of this problem. This excessive air pollution impacts everyone’s health, including kids and residents, and also contaminates the environment to no end.

People who live and work near busy roads where buses commute are further affected. It turns out that equates to over 45 million Americans. According to the EPA, folks living near highly-trafficked roads are at a serious risk of exposure to dangerous pollutants and vehicle exhaust. We’re talking about asthma in children and an increased risk of heart disease.

What are schools doing about it?

Well, not enough. In a study conducted on a group of Michigan schools that were deeply affected by pollutants because of their location, the state didn’t require schools to analyze environmental air quality before considering a new site. This mentality has to change.

Every stakeholder at the state and local level, including school administrators, community leaders, public health officials, and parents, need to work together to fight for new solutions that ensure safe learning and living for students and communities.

The primary solution is to replace diesel and other fossil-fuel powered buses with clean, electric ones. Some schools are seeing the problem and are pushing this important agenda forward. The mayors of Los Angeles and Seattle, for example, have joined up with 10 other mayors around the world to only purchase electric buses after the year 2025. These are the kind of commitments that make big shifts in our communities.

Electric school buses are the answer

That’s why Zum is fully committed to sustainability and going carbon neutral today. We’re offsetting 100% of emissions for our entire fleet from 2021 onwards and by 2025, 100% of our on-road vehicle fleet will be electric vehicles (EV).

We like to say that sustainability is now within reach. And with electric vehicles eliminating diesel exhaust, so is your community’s health.